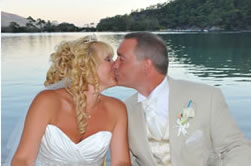 Hello Carole, Lynette Aaron and Lynette, We would like to thank you for making our Wedding Day a special one . We were a bit daunted at the fact we had never been to Olu Deniz before, so it was a big risk to us. We were given Our wedding date when we booked the wedding by Carole through e mail, and just before we flew out to Turkey we had the email of the date we were doing the long trip to Antalya. We wasnt looking forward to this i must admit but its not half as bad as its stated by other brides and grooms in last years testimonials. Dumus our driver and helper with the paper work picked us up from our Hotel the Alize at 6am,we then drove around the corner to pick another couple up to do their paperwork the same time as us. We were told if we wanted to stop just let him know , we stopped for breakfast, and also for a fantastic view on the way, and no sooner we had done that we were in Antalya, we did take a couple of long sleeved tops as that early in the morning in the moutains its a bit chilly. Our first stop was at the British Consulate ,we filled a few forms in and gave our passports over,next we drove to the Turkish Consulate, Dumus went there on his own and told us to be back within half and hour and go for a drink . We then travelled back to the same stop we had breakfast , lunch was being served if you wanted it, Dumus then had two photo albums, one for flowers and the other for wedding cakes, we picked our wedding cake and the other couple did the same and they picked flowers from the other album ,i didnt want flowers as i had made mine from silk flowers for all my guests ,ushers,groom bestman.bridesmaids and myself. We then were taken into Fethiye and went to have a medical, there is no blood test it was just going into see the doctor he looks at you and signs your papers and thats it . Dumus then walked down to the town with us so the other couple could go to the florist as they wanted to see them and discuss their flowers , after that we were taken back to our hotel where we went and got the bits to go on our wedding cake when being made, it was about 4.30pm, It seems a long day but lots to do. I had originally booked the hairdresser that Carole suggests, but the day i was due to have my practice, the hotel i was staying in would not allow an outside hairdresser into the complex as the hotel has its own hairdressers. I had my hair done in there and i must say she was brilliant, she did 4 of my guest my mum and all my bridesmaids as well everyone was pleased Dumus gave us a date to go to the beach with all the favours table settings etc…… So we went down and there we met Lynette she was Caroles Daughter and Aaron and Lynette Caroles Son in Law both were very nice people they then talked us through the ceremony and what happens, also we picked the food for the reception and gave our disc over of the songs we wanted for the walk down the aisle,the toast and the first dance. They then gave us a mobile phone so if we needed them or had any problems they were on hand. On the day of the wedding the coach picked everyone up and my bridesmaids went down in two taxis, then a car picked me and my dad up . We arrived at the beach and they started to play the music everthing went well its all translated into english by Lynette, so its a nice ceremony, The photographer is fab his photos are superb and the video man is great too the only downfall at the wedding was the microlight that was a complete waste of time for £90 what we paid , i thought with him doing so many weddings he would know the spot to drop the rose petalshe was way off the mark it went in the lagoon and he was late and it was getting dark, you dont get nothing back if he fails so please be aware of that. The Belly dancer was great she had everyone up dancing and the DJ was fab he played all what we asked for and the wedding cake tasted out of this world it melted in your mouth, The evening was over so quick but it was the best time we had and Aaron and Lynette was on hand all night if we needed something he was there a great and helpful guy. The bus came to take us all back to the hotel and everyone is still talking about the fantastic time they had at our wedding. Before we went home we met Carole in Fethiye to get our marriage certificate and our photos and video. We had a wonderful time and great memories of our wedding in Turkey and thats down to Carole, Lynette and Aaron and Lynette Thanks Love Heather & Lee x Beach wedding 29th August 2012