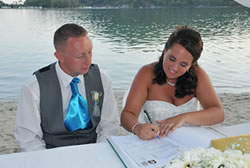 Sean and I were married in Turkey on the Blue Lagoon beach, Thursday 8th August 2013 with the assistance of Carole, Lynette and Aaron company. From making the decision several years before hand, we found from the moment we emailed our interest to Carole she remained in close contact and managed to reply to questions quickly and efficiently throughout. This has been one of the many positive features we discovered during planning for our wedding.

In October 2012, we took a four day break to Turkey (an excuse for a break with no children) where we met Carole, asked her a range of questions of which we gained many answers and visited the flower shop where we would choose our flowers for the coming event. We were greatly assisted by Ahmet who communicated fluently with myself and Sean as well as the locals to explain exactly what is was we wanted and convert prices – unfortunately, he was not around during our stay which was disappointing, a lovely gent.

Additionally, I contacted Sharon (the recommended hair dresser) for a trial hair and make up (prices average to UK) who was accommodating and came out to the hotel we were staying in. I was very pleased with Sharon, a lovely, humorous and chatty lady – and on the day itself, although I thought it may have been ‘death by hairspray’ I could completely understand why my hair style (half up and half down) did not budge all evening. In the heat of August, a strong recommendation – and my mother and bridesmaids thought she was great also.
I would strongly recommend any couples who are interested in getting married in Turkey to take a 4-5 day trip a few months beforehand and visit potential spots/places as the one essential day could be too much.
During the planning period, once more Carole, Lynette and Aaron were very helpful in organising dates, excursions and prices for the hen and stag day we held prior to the wedding. From private boats to evening meals, contact via email was fluid and accurate.

When we, a family of four – two boys, one four and one twelve, finally arrived for our holiday/wedding with the imminent arrival of 48 guests, we were contacted by Carole to arrange a meeting with one of her employees who supplied us with a mobile phone and discussed our plans for the day. We supplied him with a small case including favours and table decorations which we every pleased to see that this had been arranged accurately on the day itself.

The essential day for legal requirements, as many have posted previously, was long and I was pleased that we had already seen the flowers and were aware of prices. Communication via the employee and the cake suppliers went slightly array as on the day itself the cake we were presented with was not the cake we ordered – but I would say that this was not wholly essential as Carole had rightly pointed out prior, the cake is not as central a feature as it is back in England and not many wanted to eat cake due to the heat and such a wholesome buffet (plus drink…).

On the day itself, which was unfortunately timed with Ramadan, we (the bride, father of bride and one bridesmaid) were slightly delayed in arriving due to traffic which then had a slight knock on effect for the photos taken with a sunset background. The ceremony was quick and effective as well as supporting a reading, and then the photographer took over; a lovely gent who met us a few days after to give us our album of which is highly treasured due to its simplicity and cultural definition. As it was drawing to dusk, and this is advice for those who have an issue with wasps, there were quite a few appearing uninvitedly for the photos down by the shore…particularly around my flowers. But in all honesty, from someone who struggles to stand still when wasps are around – the photos were more important and determination took over.

The lady who ran the organisation of flowers and set up for the ceremony was friendly and efficient in her role; although my flowers had a pink tinge – once more I put this down to the communication between employee and suppliers at the time.

The layout of the area was wonderful – as the top table, we faced the buffet – allowing our guests to turn towards the beautiful scenery for initial toasts and eventual speeches. The food was very good; lots of choice and plenty in amount and for an August evening this seemed to go down well with all of our guests, including five children and two babies – all of whom, were accommodated.
As we moved to the speeches, we found the sound system of a poor quality, and this was more evident during the evening reception. We supplied our own music and playlist which we think proved to be the better option. As further entertainment we arranged the fire show which was fantastic; all of our guests thoroughly enjoyed this. We opted out of the all inclusive bar due to many of our guests preferring brands therefore we put money behind the bar instead which just about lasted the evening – but would recommend the all inclusive if your guests don’t mind the local option.

The videographer was ok, as stated in earlier testimonials the quality is as you would find from the early 90’s, although they quickly sent a replacement when we realised only one out of the two DVDs worked. We decided, instead of him filming people eating/dancing, to set a space aside for video messages – which worked very well, bar the location as it was too close to a speaker.
Another tip – if you are a couple who have children – please take our advice and book yourself two nights away at the Nicholas Heights or another adult based hotel for your wedding night. It was exceptional and such a lovely time to spend alone.

Finally, a big thank you for Carole for going out of her way to recommend and arrange for us, as a large party, to visit the Sundial restaurant in Fethyie with its spectacular views. This was a great way to end the holiday and say thank you to our guests but unfortunately, the quality of food was not worth the price asked. But go as part of your holiday – amazing views.

We, and our guests, had such a wonderful holiday and wedding – much of this was down to many issues and headaches taken away by Aaron and Lynette; we are very grateful and hope your business continues to thrive as I believe you make many people happy and help treasure their special day.

Janine and Sean – here is to your future! Hope that’s okay Carole…if you want or can include a pic, that may clarify our seating arrangement and hair do – or we can do this on your Facebook page.